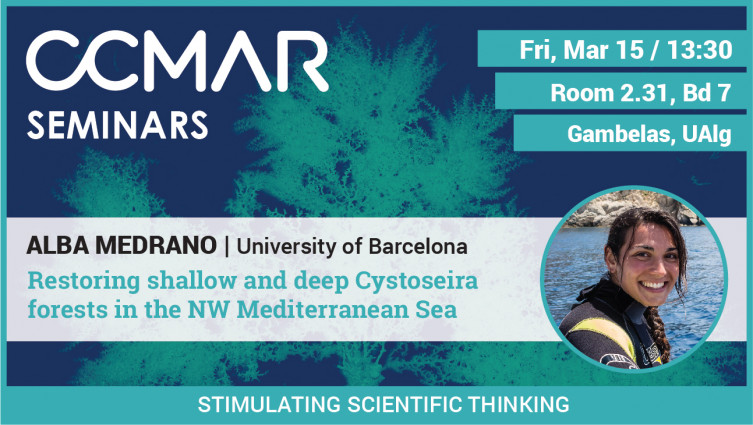 The habitat-forming Cystoseira (fucoids) species dominate algal forests communities in the well-preserved Mediterranean coast. Over the last decades, many of these communities have been degraded due to several stressors such as fishing nets, pollution or sea-urchin overgrazing as consequence of the overfishing, transforming Cystoseira forests in simplified communities. Face to the loss of these highly diverse forests, there is an increasing need to combine passive and active restoration techniques to ensure their conservation.

In this seminar, we’ll be talking about different restoration techniques carried out in the Medes Islands Marine Reserve and nearby areas (NW Mediterranean Sea), based on two emblematic but with divergent life histories Cystoseira species (C. elegans and C. zosteroides). C. zosteroides is deep water and long-lived species with slow recovery rates and is threatened mostly by local stressors. Conversely, C. elegans is a more dynamic species inhabiting in shallow waters, which have expanded their distribution from the marine reserve to non-protected areas during the recent years (with the exception of those dominated by sea urchins barrens).

Alba Medrano is a PhD student at the University of Barcelona since 2016 (Department of Evolutionary Biology, Ecology and Environmental Sciences) and member of the MedRecover Marine Biodiversity Conservation Group. Her doctoral thesis is supervised by Dr. Cristina Linares and Dr. Bernat Hereu, and funded by the Marine Ecosystem Restoration in Changing European Seas (MERCES) project. The aims of her thesis are 1) to contribute to ecological knowledge of macroalgal forests dominated by Cystoseira species, and 2) to design and implement restoration actions for macroalgal forests, especially in the Medes Islands Marine Reserve. Previously, in 2015, she did her Master’ thesis assessing the viability of the red gorgonian populations in the Port-Cros National Park (France). Before moving back to Barcelona, Alba worked at the Pontificia Universidad Católica de Chile as a research technician evaluating the ecological resistance and resilience to extreme climate events on corals and seaweeds in Central Chile and Easter Island (2010-2014).