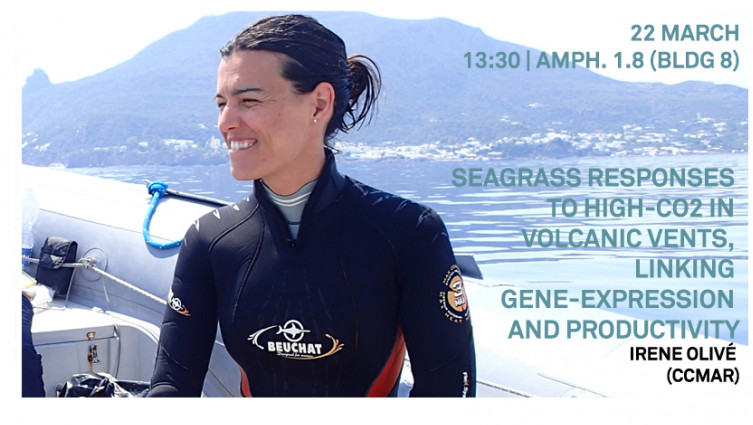 Pressures associated to global climate change represent a major concern for marine ecosystems. Among these pressures, ocean acidification derived from the increase in carbon dioxide (CO2) emissions is considered a threat for many marine organisms. However, the increase in CO2 may boost the productivity of photosynthetic organisms such as seagrasses and benefit the highly-valued ecosystems they conform.

Underwater volcanic vents with naturally elevated CO2 levels have been used for investigating the effect of ocean acidification on marine organisms and ecosystems exposed for long-term to high CO2. In situ (long-term) and transplanted (short-term) plant incubations of the seagrass Cymodocea nodosa were performed near and away the influence of volcanic CO2 vents in the Mediterranean Sea (Vulcano Island, Italy) to test the hypothesis of beneficial effects of CO2 on plant productivity. The expression of photosynthetic, antioxidant and metal detoxification-related genes to net plant productivity was related for the first time. Results revealed a consistent pattern between gene expression and productivity indicating water origin as the main source of variability. However, the hypothesized beneficial effect of high CO2 around vents was not confirmed. Contrastingly, productivity of specimens experimentally exposed to a CO2 range growing in a location away from the vents significantly correlated with CO2 availability. Results suggest that other factors related with venting emissions may be at play at vents such as Vulcano confounding the CO2 effects.

Irene Olivé received her BSc (2002) and PhD (2008) in Marine Sciences from the University of Cadiz, Spain. Her research involves the study of the morphological, physiological, biochemical and molecular mechanisms used by seagrasses and marine macrophytes to acclimate and adapt to changing environmental conditions.

In 2011, Irene Olivé won a postdoctoral fellowship (Fundação para Ciência e Tecnologia-FCT) and joined the ALGAE group at CCMar. Since then, she has been involved in several national and European projects addressing the effects of ocean acidification on seagrasses and associated ecosystems and carbon fluxes in coastal areas and volcanic vents.