Diving in searching for the fireworm in the Algarve 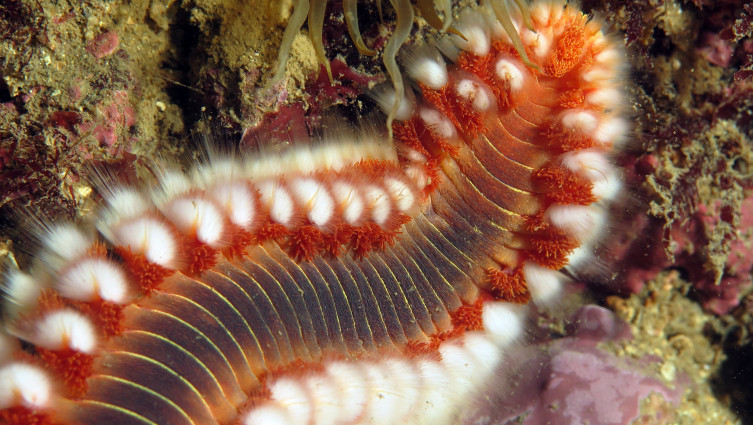 The fireworm population seems to be increasing in the Algarve, according to data collected by the NEMA (New Marine Species of the Algarve) platform, coordinated by researchers from the Algarve Centre for Marine Sciences (CCMAR) at the University of Algarve. It is a species of subtropical origin, from the group of polychaetes, and has been found on the south and west coasts of the Algarve, with occurrence records since December 2015. The NEMA citizen science project aims to monitor the presence of marine species from other regions of the globe in the Algarve. NEMA has increased scientific knowledge of this type of so-called non-indigenous species, relying on the help of Algarvians and tourists visiting the region.

In this year's edition, NEMA will organize five underwater FotoBlitzs, starting on August 14, 2021, and similarly to what happened in the summer of last year, NEMA thus once again has the support of several dive centres in the Algarve. A FotoBlitz is not a photography competition, the ultimate goal of a FotoBlitz is to document the biodiversity of a given location through photography, over a short period of time.

Over the last two decades, the amount of non-indigenous species has been increasing in the Algarve. Some of these species are of subtropical origin and have appeared in this area due to the warming of ocean waters, in a phenomenon known as topicalization.

As its common name indicates, the fireworm "Hermodice carunculata" is an animal that, if handled without protection or care, causes a strong burning sensation and localised pain that lasts for several days. This inflammatory reaction occurs because the fireworm has a series of setae (white hairs) along its body, which injects toxins into the skin that causes pain, burning sensation, and swelling. Therefore, handling it is extremely inadvisable and it is necessary to alert the population to its presence, as it is still little known in mainland Portugal.

With this initiative, NEMA seeks to alert the population to the danger of direct contact with this little-known species, which will run in parallel with an awareness campaign on social networks.

For more information about the fireworm, to make your registration in a FotoBlitz organised by NEMA, or diving pre-requisites, you should consult the NEMA website or send an email to: NEMAlgarve@gmail.com. Participants are also advised to read the FotoBlitz script, available at the bottom of the organisation's page.

This activity is also part of the recently approved ATLAZUL project (Poctep/Interreg 0755_ATLAZUL_6_E - Impulse of the Atlantic Coastal Alliance for Blue Growth), in which the University of the Algarve is one of the partners and coordinators, and which aims to explore the new species of the region for tourism purposes or introduction in gastronomy.