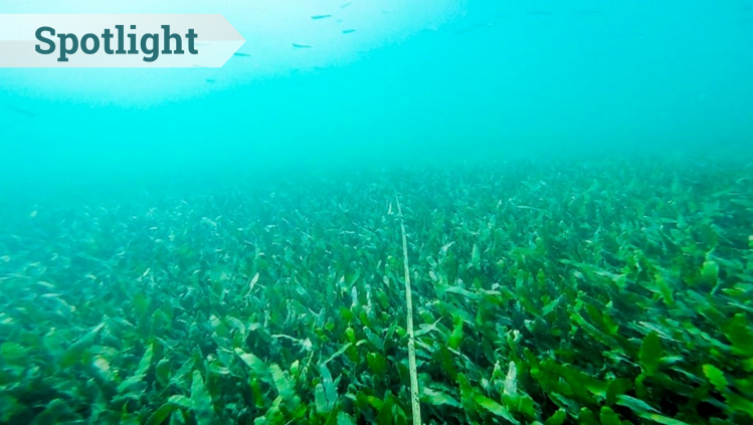 Seaweed of the genus Caulerpa invades Ria Formosa
The Ria Formosa lagoon in Algarve is recognized for having wide biodiversity and serve as a nursery ground and habitat for several commercially valuable species. In addition, the lagoon plays an important role in the region's economy, as it supports leisure for the entire community and visitors and supports several economic activities throughout the year.

The genus Caulerpa has attracted a lot of attention because many of its species have been introduced into non-native regions and became notoriously invasive, particularly in the Mediterranean Sea. This is the case of the green algae species Caulerpa prolifera that has been rapidly expanding in Ria Formosa lagoon, taking over the deeper unvegetated soft bottoms and competing with the seagrass meadows in the shallower areas.

The expansion of this seaweed has generated some concerns, as it can rapidly colonize unvegetated sediments, being more efficient than seagrass meadows under low light conditions. The impacts of its spread are particularly worrisome when they outcompete with the expansion of seagrass meadows, as these ecosystems are among the most valuable and important on Earth in terms of biodiversity and the ecological services they support.

Thus, our researchers from the Marine Plant Ecology and Fisheries, Biodiversity and Conservation groups teamed up to understand and answer the following question: "How might the rapid expansion of the algae Caulerpa prolifera affect the biodiversity of the Ria Formosa lagoon, and specifically, the provision of habitat and nursery for commercial species?"

The spread of C. prolifera algae in the Ria Formosa may alter its structure and biodiversity
This study reveals that the increasing spread of the algae C. prolifera in the Ria Formosa may alter the structure of native communities and decrease habitat diversity. The researchers found that its expansion can have negative impacts on commercial juveniles of valuable fish species such as flatfish and seabreams. These fish species have only been found associated with the native habitats of the Ria such as seagrass meadows and unvegetated sediments.

The researchers are already preparing a new study to model the future implications of this seaweed on the Ria Formosa trophic webs, where questions such as seahorse’s food source availability will be addressed.

More information about the article HERE.