Minister of the Sea dives in Ria Formosa's seahorse sanctuary 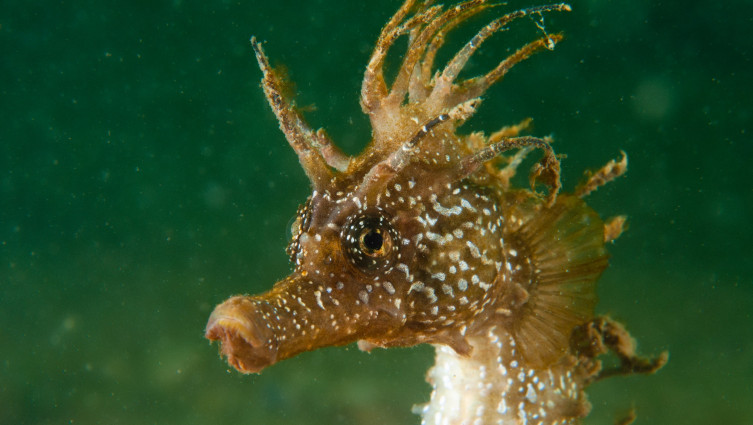 The portuguese Minister of the Sea dived this week in one of the Ria Formosa's seahorse sanctuaries recently created in the Ria Formosa in the Algarve and where animals were released last November. The invitation came from conservation photojournalist João Rodrigues (Chimera Visuals), who documented the minister's visit to be included in two ongoing photojournalistic projects for the international magazines Stern and Green Peace.

Ricardo Serrão Santos was accompanied by the researcher from the Algarve Centre of Marine Sciences, Jorge Palma, who took the opportunity to show the minister, "both the seahorses and the work we have been developing there", namely the artificial structures deployed to recreate a natural habitat and where the animals can stay, and an area of transplanted seagrass.

The "excellent water conditions" allowed us to "locate the animals" and to survey the area where four months ago a group of 60 seahorses were released, most of them born in captivity, in what was the first repopulation action to help recover the resident population.

In 2001, a study revealed that the Ria Formosa was the area with the highest density of seahorses in the world, but a 2018 census pointed to a decrease of over 90% of that community in the last decade, seriously compromising their conservation, and making them species at risk of local extinction.

On 3 March 2020, two Protection Areas were created by the Ria Formosa Natural Park (PNRF)/Institute for Nature and Forest Conservation (ICNF) to safeguard the Ria Formosa's seahorses, whose population has declined sharply in the last 20 years.

The two zones, one in Olhão - located in the eastern part of the Culatra area (Ilha da Culatra) - and the other in Faro - north of Cabeça do Morgado (Geada) - make up an area of approximately 0.61 km2 where navigation is prohibited.