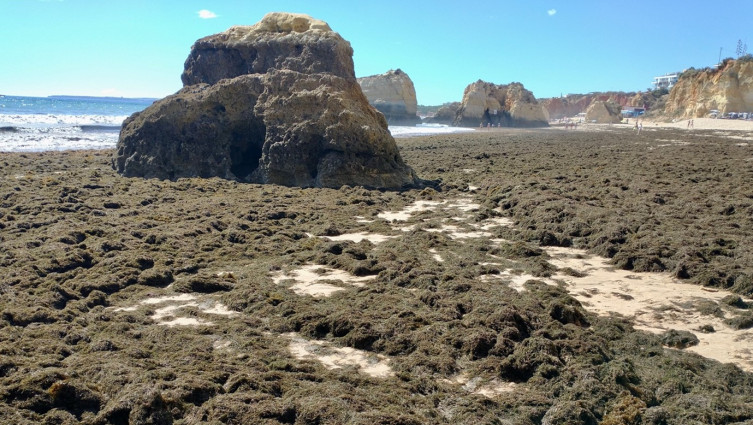 For the second year, researchers from the Algarve Centre for Marine Sciences (CCMAR) at the University of the Algarve are appealing to citizens to help them identify large accumulations of algae that appear in the ocean or on beaches along the Portuguese coast, including on the Azores and Madeira islands. Through the platform "Algas na Praia", citizens can send a set of information about the algae they found, allowing a large-scale monitoring of these accumulations

It is normal to find algae in the ocean and beaches, but when we find excessive accumulations of algae we may be facing a phenomenon resulting from excess nutrients from urban effluents or excessive fertilization in agriculture. It may also be a phenomenon caused by invasive algae, which have a very negative impact on the native species of our coast.

When algae grow excessively, they can affect biodiversity, fisheries and the environmental quality of the beach. The " Algas na Praia" platform facilitates the sending of a set of information on algae accumulations found along the Portuguese coast to researchers, enabling them to answer several questions: which species are they? When and where do they occur? What is at their origin? What are their impacts? Are these accumulations becoming more or less frequent?

The results of the monitoring carried out in the summer of 2021, during which 96 records were submitted to the "Algas na Praia" platform, allowed the identification of three distinct areas of algae accumulation on the southern coast of the Algarve: between Lagos and Olhos de Água dominated the brown algae Rugulopterix okamurae, an invasive species originating from the seas of Korea/Japan; between Vilamoura and Faro Beach dominated the red algae Asparagopsis armata, an invasive species originating from Australia; and between Armona Island and Vila Real de Santo António, proliferated the green algae Ulva sp. , a native species of our coast. This year, algae accumulations have already begun to be recorded on the beaches along the Algarve's south coast. According to Rui Santos, a professor at the University of the Algarve and researcher at CCMAR, "the records that will be submitted this year, along with the data obtained last summer, will allow us to identify the key environmental conditions for the proliferation of algae, and define strategies to remove and use this biomass."

Note that although the working group will not remove the algae on the beach, it will contact the competent authorities, taking advantage of the scientific view of the removed algae and its potential health benefits. Furthermore, through the NUTRISAFE project, the researchers are also seeking to develop a new food supplement, from the invasive algae that accumulate on beaches. Dina Simes, professor at the University of the Algarve and researcher at CCMAR, responsible for this project, points out that " some of these algae have compounds with anti-inflammatory characteristics and vascular and pulmonary protection, so they can be used in food supplements that allow reducing common complications associated with ageing and chronic inflammatory diseases.