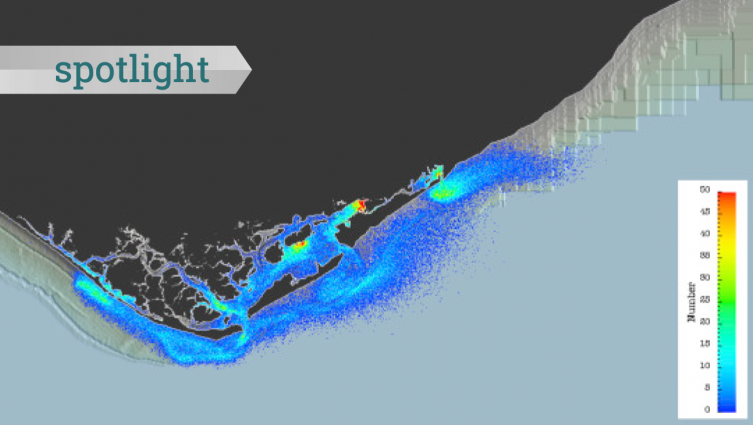 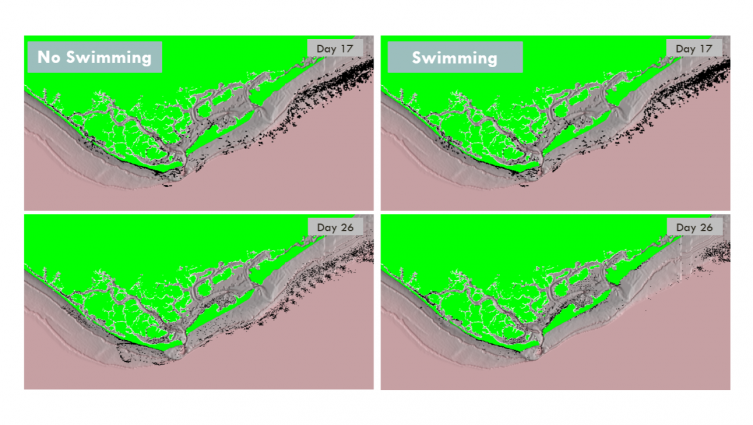 This research was developed during the PhD project of Vânia Baptista that investigate the principal drivers of recruitment variability in temperate fish species. This work results from a collaboration with Prof. Eric Wolanski from James Cook University (Australia).

Species and area of study
The Ria Formosa, in Algarve, is an important nursery area for several fish, such as the white seabream (Diplodus sargus). This is a temperate demersal fish that lives in coastal rocky reefs, sandy bottoms and seagrass beds. The white seabream is an abundant species along the Portuguese coast and sustains important fisheries.

Sensorial and swimming capabilities included in fish larvae modelling dispersion
The previous hypothesis suggested that fish larvae spawned in coastal areas reached their nursery habitats through a passive way, ie, only depending on oceanographic processes, such as ocean currents, tides or weather events, not including the swimming behaviour of the larvae.

The Sense Acuity and Behavioural (SAAB) hypothesis propose that the development of sensorial acuity (consciousness of the senses) in temperate fish larvae and their responses to the coastal nursery cues (odour, sound, visual, geomagnetic) are essential for recruitment success. Thus, the development of sensorial and swimming capabilities combined with the interaction of transport processes has been recognized that fish larvae can control, or at least influence, their dispersion and recruitment.

In this study, we tested this hypothesis by studying the ingress of a temperate fish larvae - the white seabream - into a coastal nursery habitat, the Ria Formosa. We combined the results from studies of sensorial acuity, swimming capabilities and personality traits of the larvae with a biophysical model - Individual-Based Models (IBM) - to quantify the ingress of the white seabream into the Ria Formosa. Since the implementation of IBM, fish larval swimming behaviour started to be included in the analysis of the modelling dispersion together with larval biological traits and coastal oceanographic patterns, which allowed inferring dispersion and transport of eggs and larvae and to identify recruitment habitats

The relevance of combining fish larvae behaviour and oceanography processes in modelling the dispersion of fish larvae to estimate recruitment
The results from this study showed that the successful ingress of white seabream larvae into the Ria Formosa lagoon largely depends on the location of the spawning grounds offshore from the lagoon, and the prevailing currents. The ingress of larval success also depends on their sensorial and swimming capabilities that minimize the advection by oceanographic processes and maximize retention.

The highest ingress rates were observed in larvae whose spawning grounds were located in areas with depths ranging from 15 to 17 m deep. The entrances in Ria Formosa were caused both by passive transport and swimming capacities of the larvae.

This research demonstrated the relevance of combining fish larvae behaviour and oceanography processes in modelling the dispersion of fish larvae to estimate recruitment, that can be useful to refine the management of fisheries (e.g., fishing areas, habitat closures, location of artificial rocky reefs).