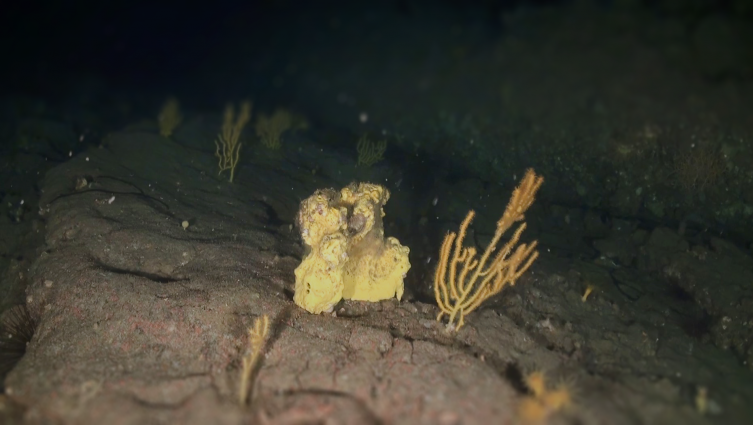 These deep marine habitats, which include coral gardens and sponge aggregations, are essential to the health of marine ecosystems. Now that they have been identified, it is urgent to implement measures for their conservation.

Off Sagres, on the southwest coast of Portugal, there is an enormous underwater canyon in which the depth rapidly descends from 70 m to more than 4000 m. It is called “São Vicente Canyon”and, with about 120 km in length and 20 km in width, it is one of the most distinctive features of this region of the Portuguese continental shelf.

In submarine canyons, such as the São Vicente Canyon, there is a high level of biodiversity due to their complex geomorphology. However, little is known about their ecosystems, especially about communities that inhabit deeper rocky substrates, where traditional sampling methods are not very effective. The development of modern tools, such as remotely operated vehicles (ROVs), has made it possible to explore these complex ecosystems of great depth.

By invitation from Oceana, an international NGO dedicated to ocean conservation, CCMAR had the opportunity to participate in a scientific expedition carried out in the Eastern Atlantic, with the objective of mapping and documenting deep marine habitats in Portuguese waters. By choice of CCMAR, the São Vicente Canyon, where there were still no records of deep-sea marine habitats, was one of the main targets of these expeditions onboard the “Ranger” vessel.

During the expedition, the researchers had the opportunity to study the biodiversity and ecosystems of the upper area of ​​the cannon, which is normally the region most used by bottom fishing. For this, immersions were carried out with the ROV in three sampling zones, between 90 and 560 meters deep. In these dives, which covered almost 9 km, the ROV filmed seabeds that had never been observed before. Analyzing the footage, researchers discovered deep habitats such as coral gardens and extensive sponge aggregations.

Deep habitats formed by corals and sponges have been recognized for their importance and vulnerability. In fact, structures formed by sponges and corals provide shelter, food, and nursery areas for other species, increasing their abundance and biodiversity in general. These habitats play a fundamental role in the dynamics of deep-sea ecosystems and in blue carbon sequestration, acting as carbon sinks by retaining carbon in their structures. On the other hand, because they grow very slowly and take a long time to reproduce, corals and deep-sea sponges are more vulnerable to impacts and require protective measures to stay healthy.

Due to the great vulnerability of these deep habitats, there are legal frameworks that define them as “priority habitats” for protection, such as OSPAR (Convention for the Protection of the Marine Environment of the Northeast Atlantic), or the Habitats Directive (a directive that ensures the protection of biodiversity in the European Union). In the São Vicente Canyon, 13 of the habitats that were found fit the definitions of priority habitats by OSPAR and the Habitats Directive. However, these habitats still lack adequate conservation measures that effectively protect them.

The thirteen habitats identified in this study in the São Vicente Canyon as potential priority habitats and ecosystem engineers are very sensitive to the impacts of bottom fishing activities. Some are also threatened by changes in sedimentation processes that can accompany bottom fishing drag on the flanks of the cannon. It is known that deep and circalittoral habitats (poorly lit areas that reach approximately 200m in depth) are essential for the health of marine ecosystems. Therefore, conservation and management actions need to be supported by information and scientific knowledge. This work contributed to increasing the knowledge of the deep ecosystems of the Portuguese coast, particularly in the southwest region, applying scientific methods to define the different marine habitats, including habitats considered priority for conservation.