The meeting will take place in the Hotel Vila Galé Albacora, a restored tuna fishing camp set in the Natural Park of Ria Formosa near the pretty coastal city of Tavira, amongst salt flats renowned by bird watchers and with close access to the long sandy beaches of the neighbouring barrier islands. In keeping with the tradition of this meeting, we plan exciting science mixed with discussion against a relaxing and beautiful backdrop. 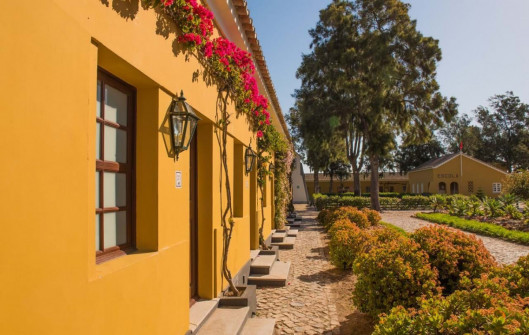 The hotel Vila Galé Albacora is the result of the restoration of the former tuna fishing camp Arraial Ferreira Neto, where the “people of the sea” linked to tuna fishing lived from March to September.

This hotel in Tavira, set in broad Natural Park of Ria Formosa, is thus an architectural witness to the way of life of fishermen and their families, when the typical Almadrava - the frame to capture the tuna - was still used.

The old fishermen houses, workshops and warehouses gave place to 161 rooms with beautiful views of the Ria Formosa. The existing chapel was preserved and is now adapted for hosting weddings and christenings, as well as the old school, converted into a kids’ club. And the former bakery became a free small museum that is open to the public.

This is where you can observe a model illustrating the great engineering work that the almadrava was and century-old documents of the Algarve Fisheries Company (Companhia de Pescarias do Algarve). As well as a video showing the tuna capture process.

Filled with the region’s tradition, this hotel in Tavira also became an eco-hotel that has received awards and recognition for its sustainable environmental practices.

The activities related to nature tourism and the outdoors, such as birdwatching, boat riding or extreme sports are a good way to harness the full potential of this place.

With free wi-fi, the Vila Galé Albacora hotel features two bars and two restaurants where tuna and the Algarve specialties could not fail to be the main dishes. To relax, enjoy the spa with indoor pool, sauna, Turkish bath and massage rooms of this hotel in Tavira.

And if you are dreaming of the sandy beaches that reach out of sight of the island of Tavira, it takes only few steps from the Vila Galé Albacora hotel to get to the pier where a boat will take you to paradise within minutes. The Barril beach with access via a picturesque tourist train and the boat trips to the Ria waters are not to be missed either.

For more cultural moments, the center of Tavira promises an actual trip back in time, with its traces of Arab influence. Also, be sure to visit the Ribeira Market and the Castle.

If you play golf, the challenge is on the 18 holes’ greens: Benamor Golf, Quinta de Cima, Quinta da Ria and Monte Rei Golf & Country Club - all of them near the Vila Galé Albacora hotel.